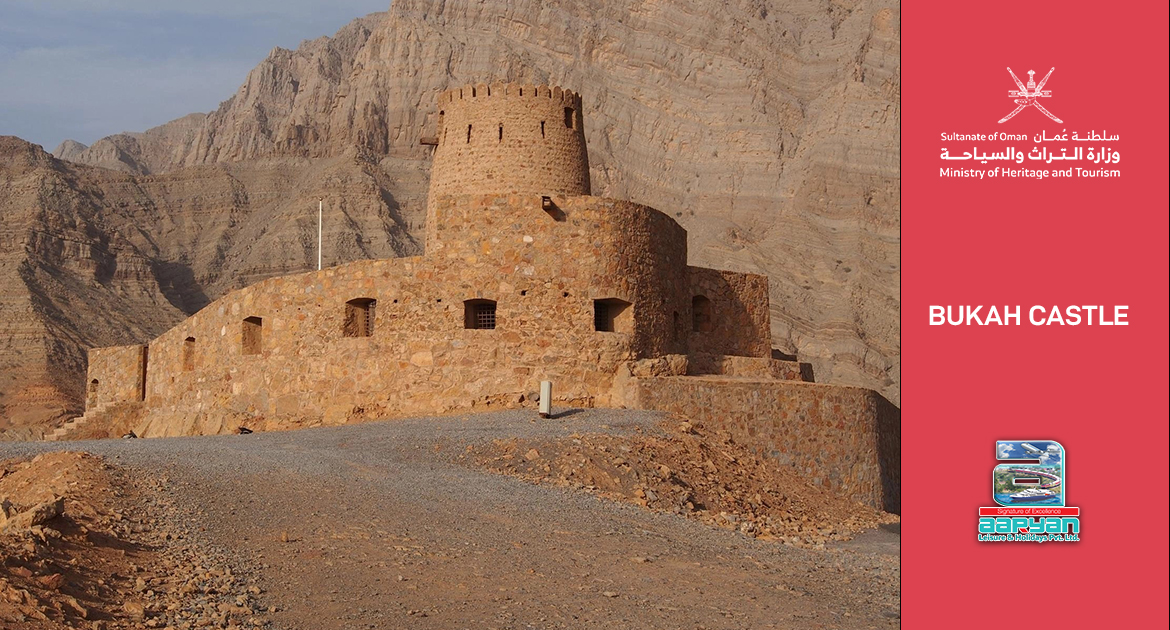 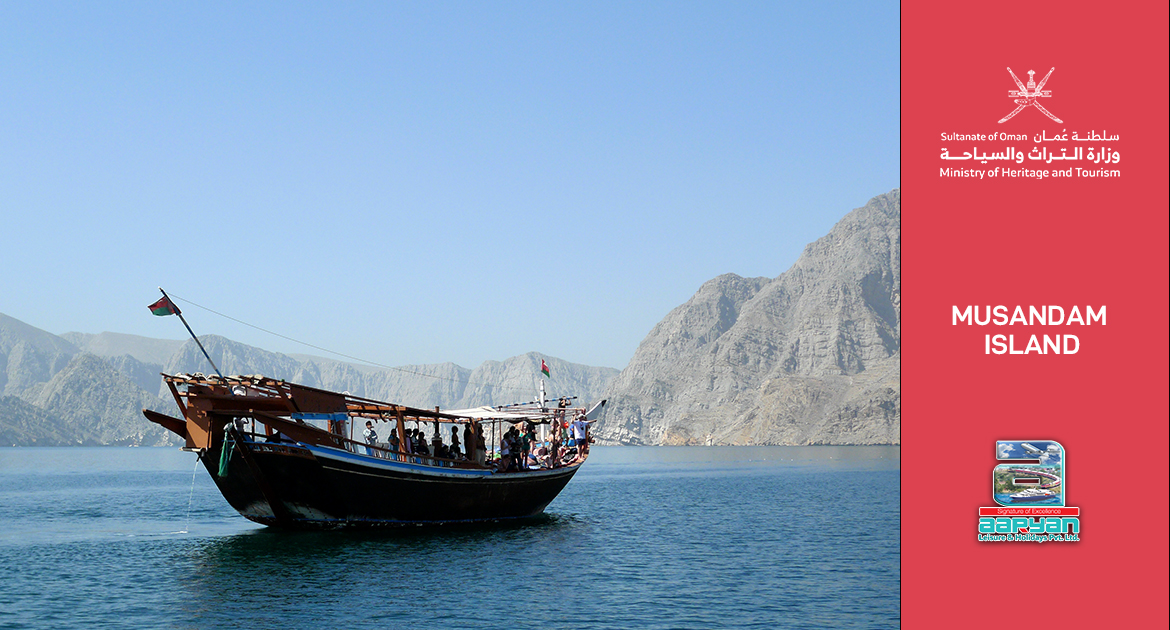 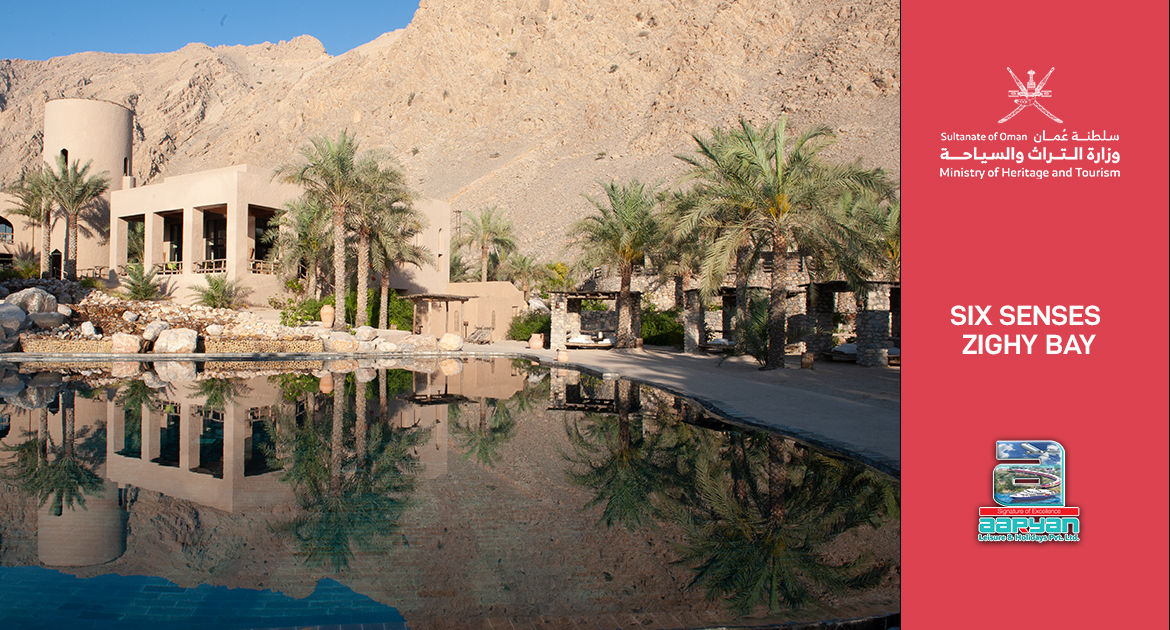 The exclave of Musandam is Oman’s northernmost governorate, separated from the rest of Oman by the UAE and home to some of the Sultanate’s most dramatic landscape. Here, 2000m high mountains meet the sea with stunning fjords and crystal-clear waters making this area one of the best diving and snorkelling spots in the world. The mountains slope steeply seaward, forming an extremely rugged and rocky coast that makes Musandam a hazard to navigation. The peninsula is mainly inhabited by the Shiḥuḥ, who are fishermen and herdsmen and are probably descended from the original inhabitants of northern Oman, pushed into the mountains by successive Muslim and Portuguese invasions. Fishing is the peninsula’s main industry.

Khasab Castle lies in the quiet fishing town of the same name, in the Musandam Governorate in Oman. It was built by the Portuguese in the beginning of the 17th century. There is evidence to suggest that it was built on the ruins of an earlier indigenous fort. Some 25 years after its construction the Portuguese were expelled from Oman and the castle was taken over by Omani rulers who modified it to their own military needs. Khasab is a small city when compared to nearby cities of the United Arab Emirates. It has many residents who mostly live in mainland Oman and come to Khasab for vacations.

Qadah in the region of Muḩafaz̧at Musandam is located in Oman - North-West of Muscat , the country's capital city. Visit Qadah to discover ancient rock drawings.

Bukha Fort was built in the 17th century by Saif bin Sultan Al Ya’rubi, a powerful ruler whose influence extended into Persia, India and East Africa. It is one of the landmarks that is impossible to miss as you drive from the UAE border to Khasab, the capital of Musandam.

Bilad Sur Castle was built in the 19th century to defend the town against marauding tribes from the inland. The castle follows a classic four-tower design, with crenelated, 6 meter high walls. However, where Bilad Sur Castle distinguishes itself with its unusual two-storey watchtower, which provides 360 views of the area. The castle now houses a museum where you can learn more about the history of the town.

This lagoon is located in Wilayat Khasab in the Governorate of Musandam. This lagoon covers 20 kilometres. Many villages overlook Khawr Sham, which can be reached only by sea in traditional vessels. Khawr Sham is considered a tourist destination for hiking, camping and watching dolphins. This beautiful inlet is interesting for its stone fishing villages, accessible only by boat, and for Telegraph Island, which dots the middle of the bay. Huge flocks of seabirds, particularly comorants, gulls and terns, can be seen along the cliffs surrounding the entrance to this inlet. It's best visited on a dhow cruise from Khasab.

Bayt Al Qufel is a special kind of architecture that is a testimony to the old Omanis’ ingenuity and their adaptation to the conditions of the weather and life, and how they tamed the environment to suit their needs. Literally meaning 'House of the lock”, it is one of the most attractive spots in Musandam. It is said that these houses made of stone and clay were used to hide and preserve food and other materials. The house was first built by digging the earth for a depth of not less than one metre. After that, large pottery jars were placed to store dates and other staples for the harsh summer months in these mountains. Then the house was constructed with an extremely small entrance that would allow no more than one person to enter. After that the house structure was built up from pebbles. The roof was finally put on, usually made from the trunks of jujube, acacia or latab trees and covered with a layer of mud and stones to form an insulating layer from moisture, rain and extreme heat. It also has a sunken floor with around two metres storage space used to store grains and dates.

Lima is a small village separated from Wilayt Khasab in Musandam Governorate by rugged mountainous peaks. The best way to reach this village is by boats that will take you through marine vistas that will be engraved in your memory for ever. You will enjoy the fantastic rock formations of the mountain range directly overlooking the sea and birds hovering over the sapphire waters. The village is known for its local crafts specially the unique AlJarz.

Dibba Fort lies in the quiet town of Dibba Al-Bayah, in the Musandam Governorate in Oman. The fort, which dates back several centuries, was completely rebuilt in the 1990's by Sultan Qaboos bin Said. It is one of the defensive and archaeological forts in the Wilayat of Dibba, which is the southern front of Musandam Governorate on the Sea of Oman. The fort is surrounded by a wall that is 64 metres long and 62 metres wide and is rectangular in shape built with stones and mud.