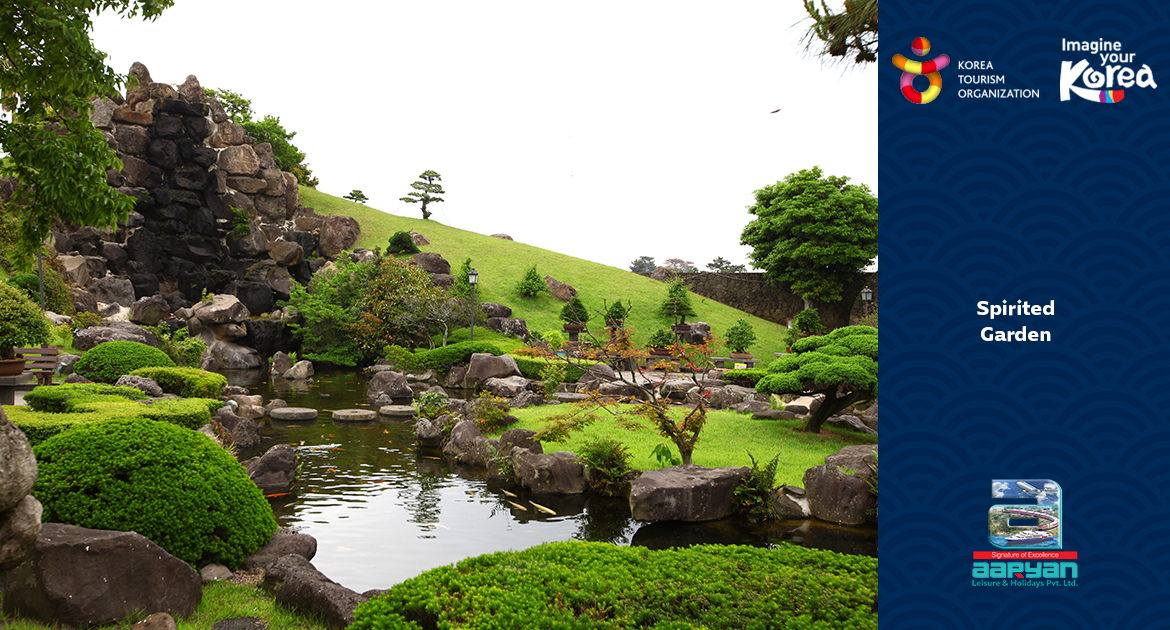 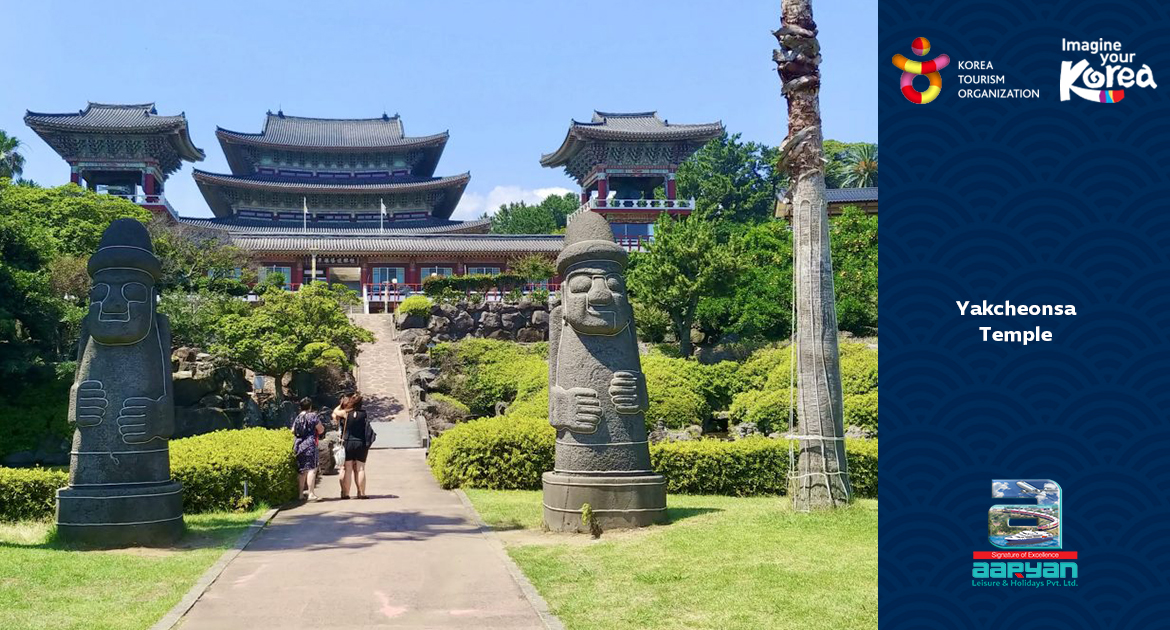 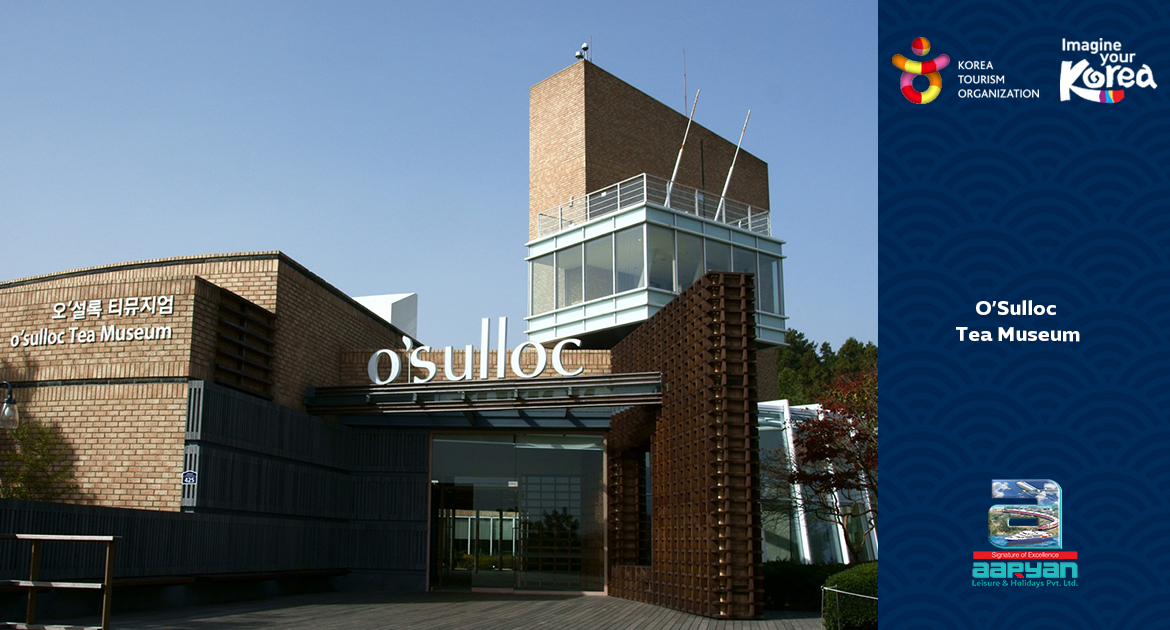 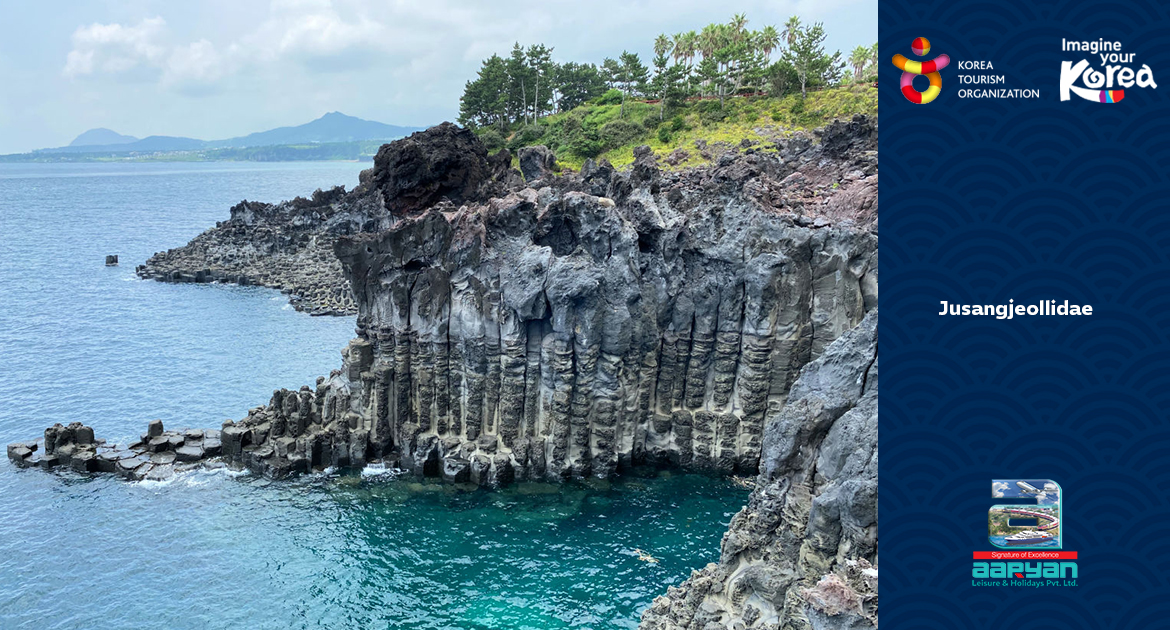 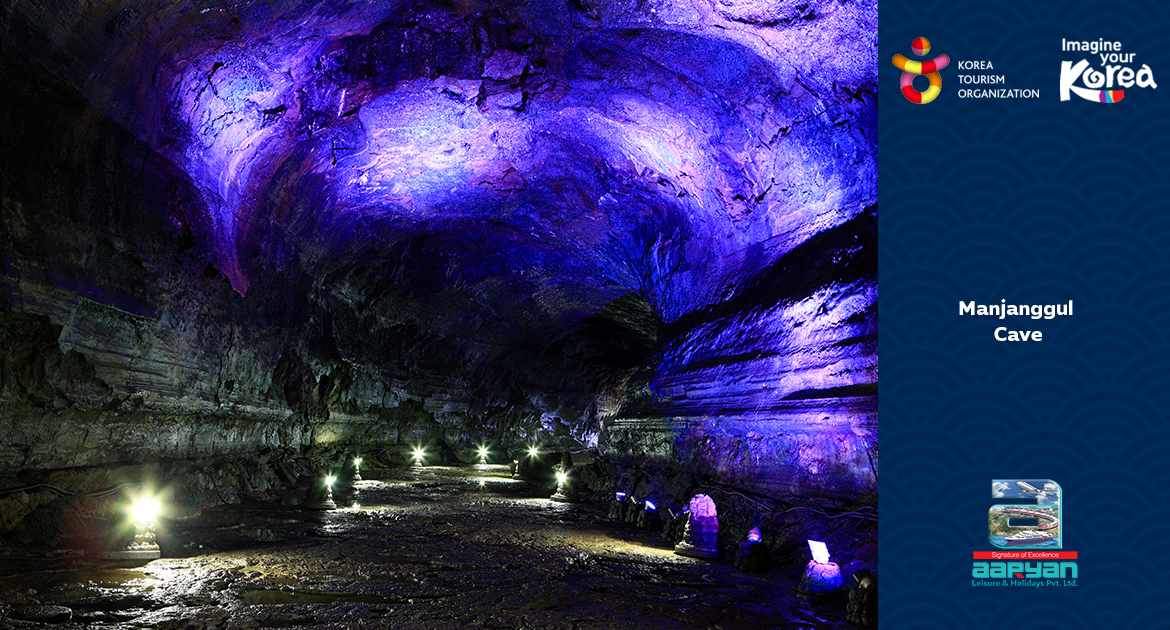 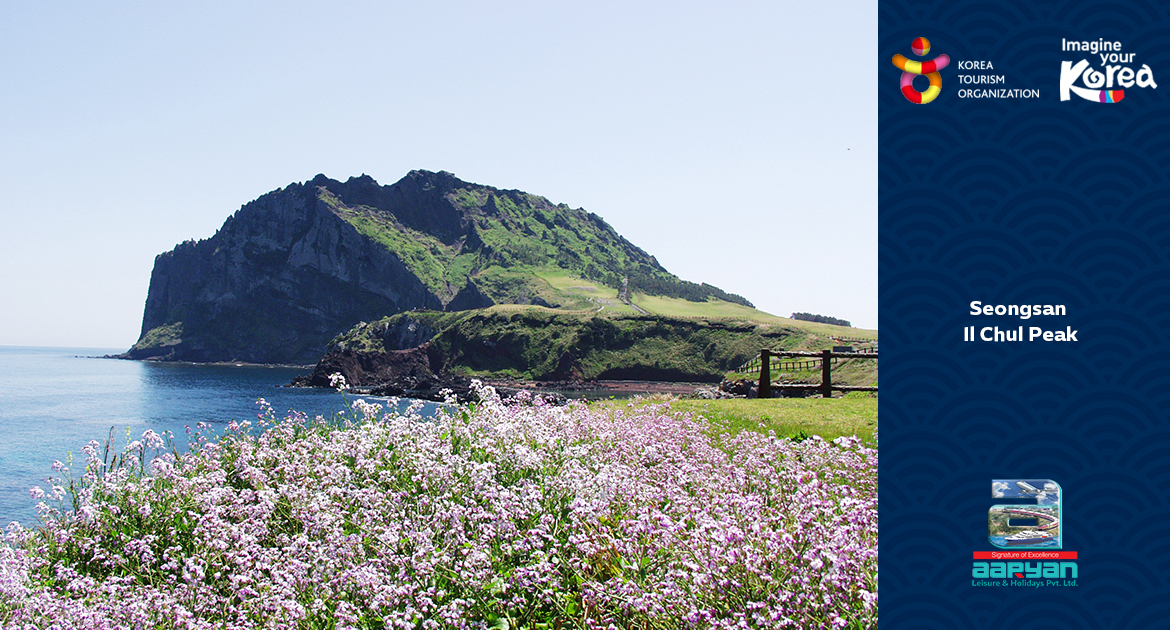 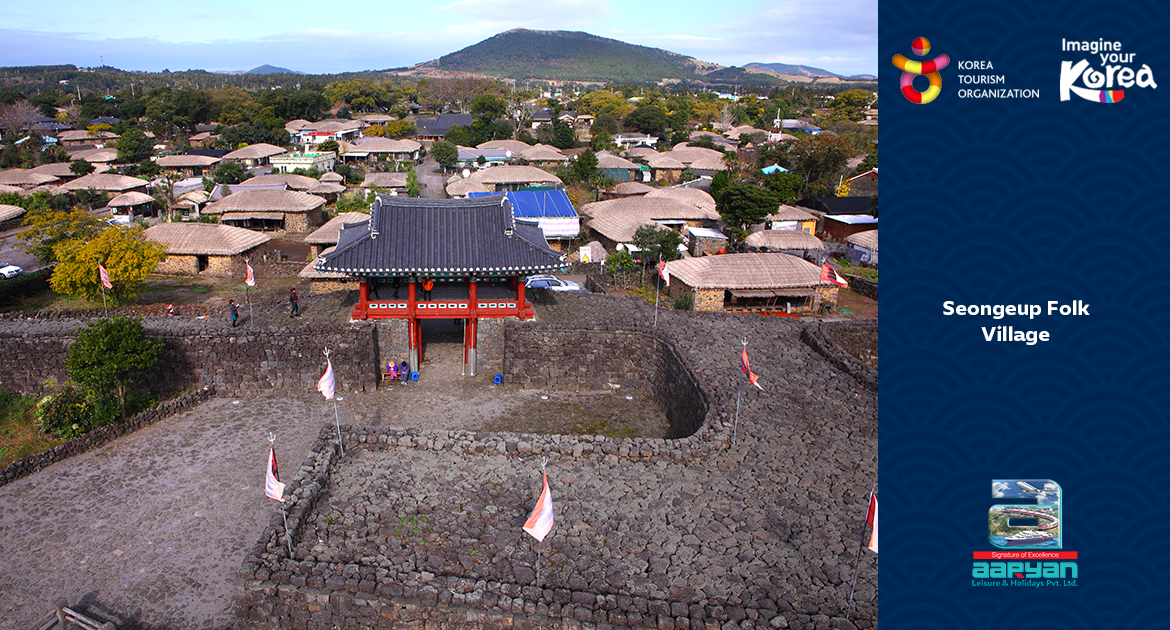 Jeju City, on Jejudo Island, is the capital of South Korea's Jeju Province. In the city, Sinsan Park has displays of marine animals at Jeju Folklore and Natural History Museum. Jejuhyanggyo Confucian School houses ancestral tablets and offers calligraphy classes. On the coast, Yongduam Haesu Spa Land has seawater saunas. Nearby, divers at the dragon-shaped Yongduam Rock collect seafood using traditional methods. The island contains the natural World Heritage Site Jeju Volcanic Island and Lava Tubes. A central feature of Jeju is Hallasan, the tallest mountain in South Korea and a dormant volcano, which rises 1,950 m above sea level. 360 satellite volcanoes are around the main volcano. Located on an island off the Korean Peninsula, Jeju has mild, warm weather during much of the year. The city is a well-known resort, with prestigious hotels and public casino facilities.

Spirited Garden is home to hundreds of bonsai plants in a natural garden with the theme of oreum and water. The name changed from Bunjae Arpia in 2007 to commemorate the 15th anniversary after opening and to renew the garden as an international garden. The history of the garden started in 1963 when Seong Beom-yeong, the founder of the garden, came to Jeju and cultivated the wasteland full of rocks. The garden came into the international spotlight as the beautiful space was created from the wastelands by a single farmer.

Upon entering Yakcheonsa Temple, guests will be greeted by a 5-meter-high statue of Vairocana, the tallest of such statues in Korea, on a 4-meter-high pedestal. The walls on both the right and left have been sculpted into large altar portraits of Buddha and in front of the Dharma Hall is a giant Buddhist temple bell, weighing 18 tons. Beloved for its size and grandeur, the temple consists of a main temple and a 3-story residential structure for the Buddhist monks. Other notable sites are Gulbeopdang, Samseonggak Shrine, and Sarira Pagoda. Yakcheonsa Temple is not only popular among Buddhists but is also a well sought after tourist destination.

Located next to O'sulloc's Seogwang Tea Plantation in Jeju, was opened by Amore Pacific in 2001 with the aim of introducing and spreading Korean teas and the traditional tea culture of Korea. The museum is a cultural space where the West and the East, and modernity and tradition coexist in harmony. The museum has a tea gallery, eco-friendly rest area, and a cafe where visitors can enjoy a variety of tasty tea-based desserts.

Manjanggul Lava Tube, located in Gimnyeong-ri, Jeju, is part of the Geomunoreum Lava Tube system. The lava tube stretches roughly 7,400 meters, with a maximum height of 25 meters and width of 18 meters. These measurements make it one of the largest lava tubes in the world. Manjanggul holds great value for science and conservation studies, having well-maintained formations despite being formed over one hundred thousand years ago.

Seongsan Ilchulbong Tuff Cone rose 180 meters above sea level due to a magma flow under the sea over 5,000 years ago. It was originally a separate island, but a build-up of sand and soil has connected it to the main island. A large crater, formed by the hot lava mixing with cold ocean water, is located at the top of Seongsan Ilchulbong Tuff Cone. The crater is about 600 meters in diameter and 90 meters deep. It has been featured in films, and was originally used for agriculture, but has now been given over to a field of silver grass.

Located at the foot of Halla Mountain on Jeju Island, Seongeup Folk Village is a small town that holds a vast amount of culture over a wide period of time. Cultural properties in the folk village have been handed down from generation to generation and include treasures such as residential houses, Confucian shrines and schools, ancient government offices, stone statues, large millstones, fortress ruins, and stone monuments. Among the cultural gems of the folk village are intangible cultural assets such as folk plays, native foods, local folk craftsmanship, and local dialect.

The water at Cheonjiyeon Falls, meaning "sky connected with land," appears to fall from the heavens, giving the falls its name. Apart from the wild Dampalsu trees, designated as Natural Monument, the wooded area also contains a great variety of rare plants such as brambles, Songyeopnan as well as Gusiljappam trees, Sanyuja trees, and camellias which all make up a forest specified as Natural Monument.